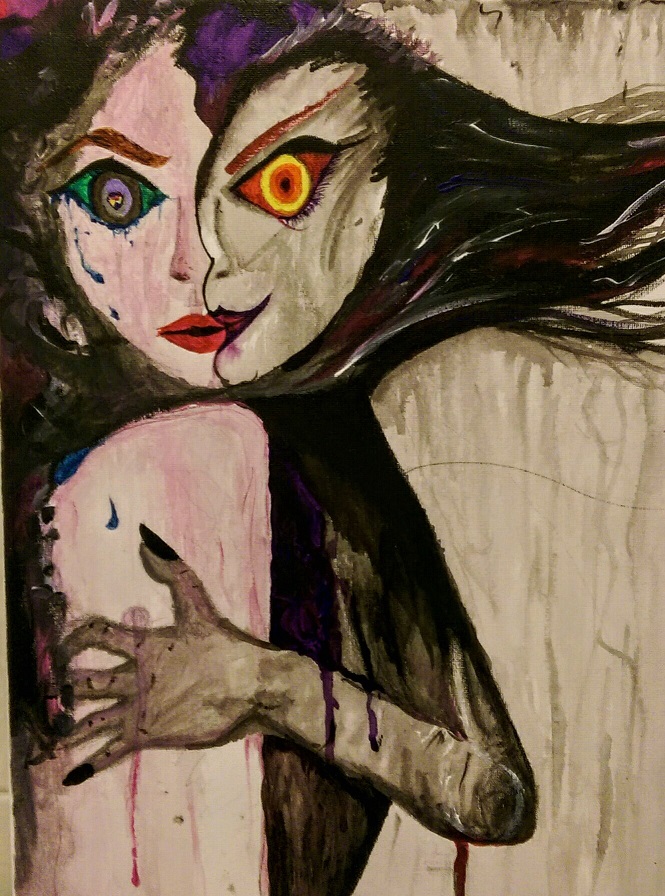 This piece was created in aid of Art Saves Lives International and the Mental Illness, Health and Recovery issue of the online magazine (which I highly recommend checking out, and to any artists from various disciplines, you can always submit work in a chance of it being issued in the next release which is centered around Capitalism, Poverty and War, by following this link: ASLI: New Campaign

I have updated this piece and will be updating the write ups for my other pieces soon, too.

The reason for this is because my mental health diagnosis’ changed.

Originally, it was thought that I had a co morbid personality disorder of Borderline Personality Disorder and Antisocial Personality Disorder. After a lot of therapy, it has come to light that I in fact, do not have ASPD. But I suffer with Dissociative Identity Disorder, this was easily misdiagnosed because I share co-consciousness with one of my alters a lot of the time. This personality can appear hostile, violent and aggressive, therefore it was believed that I was diagnosed ASPD because one of my alters has a very ‘antisocial’ personality.

With this in mind, it doesn’t change the nature or meaning of this painting that much. It simply suggests to me that the left half of the portrait signifies my core personality, while the left – in this case represents another personality that I share co-consciously with the majority of the time.

With DID, the personality states split off when trauma is repetitive and too painful to deal with, so we dissociate. Dissociation is a common experience for most people, it isn’t uncommon for people to experience daydreaming or a sense of feeling as though they are watching their own lives unfold in front of them. People with DID experience dissociation on a much more severe level.